Patricia Highsmith has been called a master of the psychological thriller. Her character Tom Ripley is as well.

Highsmith was the Edgar-award winning author of Strangers on A Train and The Price of Salt, recently adapted into the film Carol. Tom Ripley, introduced to the world in The Talented Mr. Ripley may have been her greatest invention: a psychopath with self-esteem issues who kills in cold blood, assumes the life of his victim, lives the high life in his victim’s clothes for a while — all the while holding the reader in thrall with some actual empathy for poor Tom’s predicament.

He remembered that right after that, he had stolen a loaf of bread from a delicatessen counter and had taken it home and devoured it, feeling that the world owed a loaf of bread to him, and more. 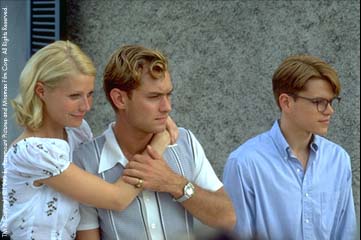 I had seen the Matt Damon-Gwyneth Paltrow-Jude Law film adaptation of The Talented Mr. Ripley in 1999, and loved it. All those gorgeous retro costumes. Italian scenery. Jude Law in a bathing suit. Philip Seymour Hoffman, Cate Blanchett and Anthony Minghella. It was nominated for five Academy awards and deservedly so. But I had not read Ms. Highsmith’s original work until recently.

And it is riveting. The Talented Mr. Ripley begins in New York with a decidedly untalented Tom Ripley running a series of minor cons in order to finance his woeful life. He’s out of a job, out of a home, out of friends. Until Herbert Greenleaf appears and begs Tom — as one of his son’s “dearest” friends — to travel to Europe, first class, on Herbert’s dime and convince son Dickie to come back home. It takes Tom all of about two seconds to jump on board and the next thing you know, he’s walking down the beach in fictional Mongibello (rendered on screen as the volcanic island of Ischia) having to introduce himself to an acquaintance who barely remembers him.

But Tom has decided to be the kind of guy who makes good things happen for himself. Whatever the cost.

There’s been a but of hubbub in my noon bookclub at the Carnegie Center Lexington recently about whether a book without a likable protagonist is a likable book. There have been loads of recent bestsellers whose less-than-likeable, ok . . . psychopathic . . . characters made them insatiable reads: Girl on A Train, Gone Girl. In a 2015 article, Sam Jordison of The Guardian takes on the topic by reexamining The Talented Mr. Ripley. When faced with a reader complaining of the lack of books with likable characters, Jordison suggests handing them a copy of the The Talented Mr. Ripley:

It is near impossible, I would say, not to root for Tom Ripley. Not to like him. Not, on some level, to want him to win. Patricia Highsmith does a fine job of ensuring he wheedles his way into our sympathies. It’s a classic story of someone who starts off down on his luck and disregarded, but who, through force of personality, hard work and sheer determination, manages to make something of himself. He’s had a hard upbringing. He lost his parents and was brought up by an aunt who called him a “sissy”. And yet, he came out the other end polite, self-effacing, hard working. He is endearingly shy in company and worried about the impression he makes on others. He is always assessing himself, always trying to improve.  http://www.theguardian.com/books/2015/jun/02/tom-ripley-the-likable-psychopath-patricia-highsmith

He had appreciated Marc’s possessions, and they were  what had attracted him to the house, but they were not his own, and it had been impossible to make a beginning at acquiring anything of his own on forty dollars a week. It would have taken him the best years of his life, even if he had economised stringently, to buy the things he wanted. Dickie’s money had given him only an added momentum on the road he had been travelling. The money gave him the leisure to see Greece, to collect Etruscan pottery if he wanted (he had recently read an interesting book on that subject by an American living in Rome), to join art societies if he cared to and to donate to their work. It gave him the leisure, for instance, to read his Malraux tonight as late as he pleased, because he did not have to go to a job in the morning. He had just bought a two-volume edition of Malraux’s Psychologic de I’art which he was now reading, with great pleasure, in French with the aid of a dictionary.”

I truly enjoyed the time I spent in Mongibello with Dickie Greenleaf and his friend Marge and meeting their friends — and others. Your book club will enjoy it too. And there’s great Italian food to be culled. And lots and lots of Martinis.

Pasta with seafood. I would make linguine with white clam sauce because that’s my favorite. I buy the small cans of clams at the grocery store and use the recipe on the back but add white wine to the saute.

The setting of The Talented Mr. Ripley is reputed to be in the late 1950s though Highsmith throughout uses a date with the notation “19–,” leaving the question open. I tend to be influenced by the movie’s choice of music and would play:

Like what you’ve read? Check out my webpage: http://www.pameladae.com

I’m on vacation in Florida, but brought Kentucky with me in book form, no where more startling than in Holly Goddard Jones’ first novel, The Next Time You See Me.  One thousand miles from home, and yet the divisions and contradictions of home so clearly delineated in this haunting tale.  Black and white, privileged and poor, educated and handicapped, youth and age, North and South.

The novel begins in an eighth grade classroom in rural Western Kentucky, somewhere near enough to the Tennessee border, that the residents of Roma can cruise across the state line on Friday and Saturday nights when they are in the mood for trouble.  As in most eighth grade classrooms, the plain-but-kindly-and-intelligent-local (poor) child, Emily Houchens, has a crush on the wealthy, athletic, good looking newcomer, Christopher Shelton, who alternately loathes and feels compassion for her.  Their teacher, Susanna is haunted by memories of her own high school years when she fell in love with the African-American baseball star (turned small town detective) but turned him down to marry the prissy, boring high school band director with whom she has a child.

Before too long, the teacher’s wild child sister goes missing.  Implicated in the search are Tony Joyce, the detective, Wyatt Powell a co-worker of Emily’s father at a local factory, and Emily herself.  Emily finds herself in the middle of several spokes of this interlocking wheel, due to her rather unfortunate attachment to two things:  science experiments and Christopher Shelton.

Throughout the novel, the opposing poles of prejudice battle, at times literally and more often metaphorically.

. . . there had been a moment in Nancy’s not too long ago, when she’d caught the reflection of a good-looking, blond-haired younger guy in the mirror behind the bar and smiled flirtatiously, and it wasn’t that he’d rejected her or insulted her; she’d been insulted plenty of times in her life, and the guy who broke her nose five years ago had called her a troll, a dyke troll.  It was that this young guy had not seen her.  Or rather, he’d seen her, he’d registered the fact of her, but he’d dismissed her.  it was instant and impersonal, and Ronnie had realized, with the kind of eerily accurate insight that occasionally dawns upon the drunken, that she seemed old to him.

I’ve read comparisons of this novel to Gone Girl, but other than a murder investigation, the plots are not similar.  Jones’ writing is much deeper and more character-driven.  The scenery is lush, tactile, evocative.  She gets inside the minds of multiple characters, not just one or two, and tells their parts of the story from their own point of view.  I was left wanting only to hear a little more from one point of view, but perhaps that would have ruined the book.

There’s a food fight in the book and for my book club, it would be mandatory to serve an upscale version of the food used.  (with fingers crossed that it didn’t get thrown).

The food fight involved pudding also, but I think I would avoid that and serve biscotti with some nice gelato.

And white wine, for Susanna.

MUSIC referred to in the book