Oxycontin, methamphetamine, teen pregnancy, predatory teachers, economic upheaval, poverty. The headlines of tragedy we’ve become far too accustomed to reading. Carrie Mullins tackles them all in her first novel, Night Garden, a literary cry for help for Kentucky’s small towns and their residents being ravaged by drugs.

Marie, Night Garden‘s protagonist, is a high schooler whose brother Shane has been involved with a teacher at the school since he was a sophomore. Shane’s leaving and Marie dreads being at home alone with her middle class parents. The night before Shane’s departure, the two attend a party.

Shane disappeared into the woods up above the fire, left with one of the Owens boys to get high. As soon as he was out of sight, Ms. Anglin put a champ chair beside Marie. She got a beer and some ice out of the cooler then sat down and showed Marie her finger. “So what’s going on with him?” she asked, holding the ice on her finger. “Does he have a girlfriend?”

“I thought you were his girlfriend,” Marie said.

“I know he’s screwing that Miller girl. Oh God, I love him.” Marie looked down at her hands in her lap, down at the ground, looked at anything except her journalism teacher. “I’m only six years older than him. That’s nothing. In the grand scheme of things, it’s a drip in the bucket.”

In Night Garden, ultimately, Marie has had enough and escapes her safe, middle class life to live with Bobo Owens, an exotic, attractive, charmer with a dream of owning his own kayaking business by saving from the proceeds of his family’s meth trafficking and bootlegging. Bobo and Marie set up house and soon, far too soon, Marie finds herself pregnant and Bobo a changed man: paranoid, emaciated, unfaithful, violent, and unsupportive.

According to the cover of Night Garden, author Carrie Mullins grew up and continues to live

in Mt. Vernon, Kentucky. Night Garden is the first novel published by Old Cove Press, a literary publisher based in Lexington, Kentucky, and founded by noted author Gurney Norman and his wife Nyoka Hawkins. http://oldcove.com. Gurney Norman has been a member of the University of Kentucky Department of English since 1979 and currently serves as the department’s Director of Creative Writing. His first novel Divine Right’s Trip (1971) was published by The Dial Press, Bantam Books, and Pantheon Books of England.

Nyoka was kind enough to help me connect with Carrie for some q&a, food and music talk . . . and of course a recipe or two

Daeandwrite: The food in the Night Garden illustrates the socio-economic divergence between Marie’s family and Bobo’s. Was this a conscious decision?

Carrie: There are definite class and status issues in the book, and food is one way that plays out. The food was also a modern vs. old time divergence that I was thinking about. The food Marie makes for her parents early on – biscuits, sausage, eggs, fruit and coffee – that is kind of old school, and it takes time to make all that, especially the way Marie was making it (biscuits from scratch, she was not even using Bisquick). And then when she takes up with Bobo, it is mostly all convenience food, like we all eat now, pizza and cereal and honeybuns and all that, stuff that is easy to make and easy to eat but not necessarily very good food. With the exceptions of Marie making a cake from a box for Etta’s party, Etta’s actual party where they are working in the kitchen making potato salad and lunch for everyone, and being at Crystal’s house when she makes the casserole, there really isn’t any food that is “made” in their world.

Carrie: My grandma Hattie made the recipe from the side of the Hershey’s Cocoa tin – cake and icing both. She made it in a bundt pan, and she made it for about every get together we had – Memorial Day especially when everyone would come home from Ohio to visit. She made the best chicken and dumplings, fried apple pies, slaw, everything. Even her hamburgers were different and delicious, she sliced up onions and put them right in the hamburger. In fact, all the women in my family, on both sides, were incredible cooks. They’d make a big tableful of food for every get together. I’m like Marie in that I’m pretty nostalgic for all that food and those times together.

Here is the Hershey’s recipe:

And my Aunt Iris Rose made a chocolate cake from the Settlement Cookbook, (1965), here 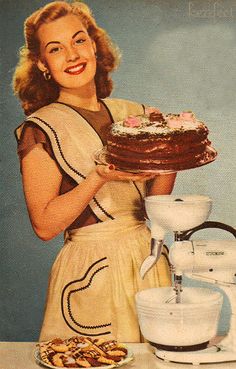 Sift flour, sugar and salt together

Add butter and mix with fingertips or pastry blender to the consistency of corn meal.

Pour mixture equally into pans and bake for 35-40 minutes, until cake tater or fork comes out clean when inserted in center.

Daeandwrite: Did you have music you listened to during the writing or editing process? Any particular genre or songs? Do you have songs you associate with any particular character?

Carrie: I listened to Gillian Welch quite a bit. She has a song “The Way It Goes,” that has the same sort of atmosphere as the book, I think. https://www.youtube.com/watch?v=AiS37_EULj8  And everything by the Drive By Truckers, and Jason Isbell – his album Southeastern especially. The Dixie Chicks, Steve Earle, Gram Parsons and U2 are always on all my playlists. Shelby Lynne and Caroline Herring as well.

Daeandwrite: Why did you feel compelled to put this story on paper? What was it about this particular tale that you wanted to convey?

Carrie: People I cared about in my county, a whole generation it seemed like at one point, were really being devastated by drugs. Starting with oxycodone and then moving on to methamphetamine. I didn’t know how to fix it, but I could write about it. I guess I wanted to make a sort of “record” – fictional but near enough to true, to the time and the people of this time and place and what they were going through.

For my book club, I would make the breakfast that Marie fixes for her parents in Chapter 3. Homemade biscuits, sausage patties, scrambled eggs. And I would definitely make that Chocolate Cake!

Carrie said she listened to Gillian Welch quite a bit while writing Night Garden. “She has a song “The Way It Goes,” that has the same sort of atmosphere as the book, I think. https://www.youtube.com/watch?v=AiS37_EULj8.” Carrie also suggested Drive By Truckers, Jason Isbell. The Dixie Chicks, Steve Earle, Gram Parsons, U2, Shelby Lynne and Caroline Herring.

Carrie Mullins will be at the Kentucky Book Fair in Frankfort on November 5 and the Southern Festival of Books in Nashville in October. Night Garden is available at Morris Book Shop, Wild Fig Books & Coffee, Carmichael’s in Louisville, and Amazon. It can also be ordered directly from Old Cove Press by emailing  books@oldcove.com  or by phone 859-361-0533