It is hunting season in North Dakota, 1997, and Landreaux Iron is stalking a buck on the land adjacent to his own. He has confidence borne of a lifetime of successful hunts: he will kill the deer, thank it for its food, share the meat with his family — wife Emmeline, sons LaRose, Willard, Hollis, daughters Snow and Josette; his friends; even his personal care clients. Landreaux sights the deer, shoots. But it is not the buck that is taken: it is Dusty, the five year old son of his friend and neighbor. Dusty Ravich and LaRose, Landreaux’s son, have grown up together, children of half-sisters and are nearly as close as brothers. Dusty plummets from his tree perch, and in that instant the lives of everyone within his scope are radically changed.

Like The Round House, https://daeandwrite.wordpress.com/2014/09/20/national-book-award-winner-the-round-house-louise-erdrich/, LaRose revolves around the tribal life of the Ojibwe people in North Dakota. There’s even a brief, and frankly confusing, appearance by Father Travis from the earlier novel. But in LaRose, history takes a central  role. The history of each character which in the study of the individual reveals the history of a people, beginning with the first LaRose, a young girl, in the 19th Century, a healer and a mystic:

She learned how to sew with a machine. How to imagine her own mouth sewed 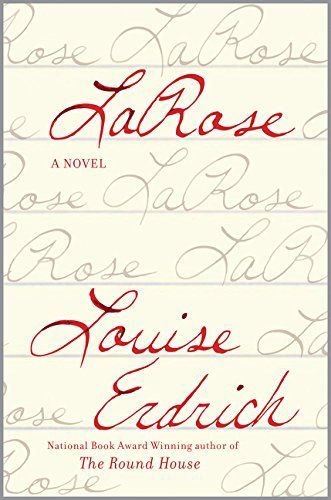 As an aside, news reports last week spoke of the repatriation of the remains of Native American children forced to attend assimilation boarding schools, http://www.post-gazette.com/opinion/editorials/2017/08/09/Matter-of-honor-Grave-repatriation-of-American-Indians-is-just/stories/201708310020, an issue central to the story of the LaRose just prior to Landreaux’s son.

the traditional Ojibwe sweat lodge and when they emerge have a solution. They will give their son LaRose to Dusty’s parents, Peter and Nola. “Our son will be your son now.”

With LaRose, Louise Erdrich won the 2017 National Book Critics Circle Award for Fiction and was a finalist for the PEN Faulkner award. I listened to this book on Audible and it is the first I’ve heard read by the author. Louise Erdrich reading her own words allowed me to hear the book as the author wanted it to be read, with emphasis on the words she chose to emphasize, focus on the passages upon which she wished to focus.

He was becoming an effective human being. He had learned from his birth family how to snare rabbits, make stew, paint fingernails, glue wallpaper, conduct ceremonies, start outside fires in a driving rain, sew with a sewing machine, cut quilt squares, play Halo, gather, dry, and boil various medicine teas. He had learned from the old people how to move between worlds seen and unseen. Peter taught him how to use an ax, a chain saw, safely handle a .22, drive a riding lawn mower, drive a tractor, even a car. Nola taught him how to paint walls, keep animals, how to plant and grow things, how to fry meat, how to bake. Maggie taught him how to hide fear, fake pain, how to punch with a knuckle jutting. How to go for the eyes. How to hook your fingers in a person’s nose from behind and threaten to rip the nose off your face. He hadn’t done these things yet, and neither had Maggie, but she was always looking for a chance.

Ultimately, LaRose asks whether redemption is possible when you have committed an unforgivable act. Father Travis, Landreaux, the first LaRose, Nola (Dusty’s mother), Romeo — a childhood friend of Landreaux, evenly the saintly Emmeline struggle to find the answer for himself or herself. Erdrich’s answer, though, is yes.

I highly recommend LaRose for your book club’s next read.

The closing scene of LaRose features a graduation feast.

I haven’t made fry bread, but here’s a recipe from Food.Com: http://www.food.com/recipe/native-american-fry-bread-367036

Mix all ingredients. Cover and “let age” a few hours in refrigerator. Stir well before serving.

According to their website, the Medicine Wheel Spirit Singers’ repertoire is from historical Ojibwe traditions, translated into English. http://www.medicinewheelspiritsingers.com/music/the-songs-we-sing/