Monsieur Perdu lives a small life in Paris, mourning a love lost decades ago. He is the proprietor and prescriber extraordinaire on the Literary Apothecary, a floating book shop barge on the Seine. He fills his life at 27 Rue Montagnard by eavesdropping on his neighbor’s celebrity gossip, eating a routine set of meals, reading and refusing to think of the love who left him 21 years before. By day, he prescribes books (with the occasional refusal of sale of an inappropriate read) to those who board the Literary Apothecary. His primary companions are a couple of literary lovers.

saw Kafka and Lindgren sloping toward him beneath the avenue of trees that lined the embankment. Those were the names he’d given to two stray cats that paid him daily visits on the basis of certain preferences they had developed. The gray tomcat with the white priest’s collar enjoyed sharpening his claws on Franz Kafka’s Investigations of a Dog, a fable that analyzes the human world from a dog’s perspective. On the other hand, orange-white, long-eared Lindgren liked to lie near the books about Pippi Longstocking; she was a fine-looking cat who peered out from the back of the bookshelves and scrutinized each visitor. Lindgren and Kafka would sometimes do Perdu a favor by dropping off one of the upper shelves without warning onto a third-category customer, one of the greasy-fingered type.

But Monsieur Perdu’s life is upset by two arrivals: a new boarder at Rue Montagnard and a young, successful novelist aboard the Literary Apothecary. With no plan, Perdu upsets his entire life, gives “the gangway a few powerful kicks to release it finally from the ground,” and sails forth on the Seine with no destination other than “‘Away from here!'” And it is then, as with most river trips, the big adventure begins.

I truly enjoyed this book, much in the same way I did The Storied Life of A.J. Fikry, Mr. Penumbra’s 24-Hour Book Store and Shadow of the Wind.  It is ultimately a book about a man who loves books and sees books themselves as a healing, medicinal force. I agree with him. In a critical review by Amanda Vaill, the Washington Post called international bestseller The Little Paris Bookshop a “novel [that] tastes like artificially flavored cardboard.” https://www.washingtonpost.com/entertainment/books/the-little-paris-bookshop-by-nina-george-exudes-all-things-french/2015/07/28/d9bc549c-2b39-11e5-a5ea-cf74396e59ec_story.html

Kirkus Reviews called it “a warmhearted, occasionally sentimental account of letting go of the old loves to make room for new.”https://www.kirkusreviews.com/book-reviews/nina-george/the-little-paris-bookshop/

I thought it was lovely. Yes, it’s sentimental. But if you are taking me on a river trip aboard a novel-filled barge into Provence, a peck of sentimentality is perhaps to be expected, and appreciated. I think your book club would love The Little Paris Bookshop.

I would intersperse some great French music with tango. On a new find (for me!) lastfm.com, you can enter “French chanson” and have a whole night of Serge Gainsborough, Edith Piaf, and Jacques Brel. 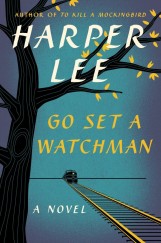 Readers of daeandwrite not living under a rock will have seen that Harper Lee is about to publish her second novel, entitled “Go Set a Watchman,” a “newly discovered” novel written in the early 1950s, according to Harper Lee’s legal representative and her publisher Harper Collins.  Harper-Collins has today revealed the cover of Go Set a Watchman, above, which recalls the look of the original cover of To Kill A Mockingbird with elements of black tree branches and light green leaves against a solid background. http://www.harpercollins.com/books/9780062409850

Readers of daeandwrite may also remember that I’ve written of my concerns about the publication of this new find before:  https://daeandwrite.wordpress.com/2015/02/05/the-tale-around-the-tale-harper-lees-new-novel-go-set-a-watchman/.

My concerns have not lessened after reading Marja Mills’ recollection of her years of friendship with Harper and Alice Lee.  Mills, a former reporter and feature writer for the Chicago Tribune, went to Monroeville, Alabama, hoping against hope to meet with Harper Lee, the famously reclusive author for an interview about the Chicago Public Library’s selection of To Kill a Mockingbird as the first selection in its One Book, One Chicago program.  Although initially given the Lee run-around, Mills eventually became not only friendly with, but confidantes and neighbors of Harper and Alice Lee.

Mills gets no further than page 46 before she detailing Harper Lee’s aversion to publishing another book.  This incident below is in 1963, mind you.  Well after the publication of To Kill A Mockingbird.

Questions about her second book began to rankle.  She wasn’t making the progress she hoped, and preferred not to disclose the specifics of the novel she had been working on for more than a year at that point.  The expectations of a second novel were overwhelming.  When you start at the top, she told those close to her, there is nowhere to go but down.

Her decision never to publish another book took on the aura of a dramatic decision she had made early on after the overwhelming success of To Kill a Mockingbird  Her choice to live out of the public spotlight and begin a half century of silence seemed equally stark.

But the decision not to publish again was far more gradual than that.  As I got to know Nelle (Harper Lee) and her friends, I learned that, rather than a grand decision, the shape of her life was dictated by a series of choices made at different points along the way  For many years, she thought there might be a second book.

At age thirty-four, Harper Lee had a stunning achievement behind her, and a world of promise before her.  Naturally, she planned to write more.  She would turn her keen eye once more to the complexities of character and community.  In To Kill a Mockingbird and in future work she envisioned, the rich particulars of her corner of the Deep South could illuminate something universal.

“I hope to goodness every book I write improves,” she told an interviewer, only half in jest, in 1964.  “All I want is to be the Jane Austen of south Alabama.”

(Emphasis mine).  In 1964, Harper Lee was well-aware of having written what would have been the forerunner of To Kill A Mockingbird.  And clearly, had no intention of publishing it.  She made no reference to it, or even considered it.  She was thinking of, considering and planning future work, not thinking of past.

In the epilogue, Mills recounts that Nelle suffered a serious stroke in November 2007 and thereafter underwent months of hospital treatment and rehabilitation in hopes of being able to walk again.  Unfortunately, that didn’t happen and Nelle moved permanently into an assisted living center.  Nelle was, according to Mills, “able, for a time, to keep up with some reading, to hold the kind of conversations she used to with friends, to get out a fair amount.  She had good days and bad days.”

But, according to Mills, in her at least annual visits over the next several years, Harper Lee continued to decline.  Although the time frame is not completely clear, it appears that sometime between 2009 and 2011:

Things became increasingly difficult as Nelle’s condition worsened and her memory failed, as had [her sister] Louise’s, who died in 2009 at age ninety-three.  By the time I saw her a couple of visits later, she was not the Nelle I knew.

Another recent update is that, based on an anonymous tip filed by a self-proclaimed doctor and friend of Harper Lee concerned she was unable to give informed consent, the Alabama Human Resources Department is investigating a claim of elder abuse.  Articles from the Washington Post and New York Times outline the issues and cover the story in varying depth:  http://www.washingtonpost.com/news/morning-mix/wp/2015/03/12/report-alabama-investigating-possible-elder-abuse-in-connection-with-harper-lees-new-novel/, http://www.nytimes.com/2015/03/12/arts/artsspecial/harper-lees-ability-to-consent-to-new-book-continues-to-be-questioned.html?_r=0

Harper Lee wrote these beautiful words:  “Mockingbirds don’t do one thing except make music for us to enjoy. They don’t eat up people’s gardens, don’t nest in corn cribs, they don’t do one thing but sing their hearts out for us. That’s why it’s a sin to kill a mockingbird.”

It would be a sin to take advantage of one as well.