In Woodford Brave, Corey Woodford’s dad is gone to war, serving in the US Armed Forces during World War II. A statue of Corey’s grandfather, a World War 1 hero cements the center of Corey’s town. But Corey isn’t so sure about his own heroic status. He jumps at stray cats, fears ghosts in the house next door, and can’t quite bring himself to confront his best friends’ teasing. He would rather just escape into the Cosmic Adventures of the Mighty Space Warrior comic books he reads or into his own alter-ego as “The Kid” in the comics he draws to send to his dad.

personal approach to Woodford Brave, a mid-grade novel. I was fortunate to be at an early reading and signing of Marcia’s for this book. She said it is one of her most personal works: “there are scenes from my life, my family” in this book. One of which is the fearful Irish Wolfhounds who patrol the yard of the neighbor Corey suspects is a German spy. Marcia’s own childhood experience of confronting two such beasts inspired their appearance here.

Woodford Brave confronts some tough issues: bullying, absence of a parent, death, prejudice. Marcia said that she conceived Woodford Brave as a book about the Vietnam War era, but ultimately was convinced to transfer the book to the Second World War. I think it works well, maybe better. The earnestness of Corey yearning to become the kind of man he believes his father and grandfather to be somehow seemed to me more closely linked to the landscape of the “greatest generation.” Corey’s frustrations and goals seem pretty universal though.

I was sick of not being taken seriously, of always having to prove myself. I was tired of the way my best friend laughed when Sawyer made fun of me, and how they both acted like the fact that my father and grandfather were both war heroes had absolutely nothing to do with me. My veins carried the blood of the brave, and they knew it . . .

One striking aspect of Woodford Brave is the incorporation of Corey’s comic strip, written by Marcia and illustrated by Kevin Whipple, to advance the plot. Through his character, “The Kid,” Corey communicates with his dad about things that he, Corey, can’t find a way to say. 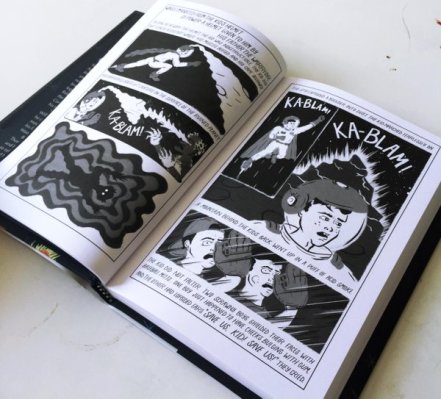 I quite enjoyed Woodford Brave, so much so that it will be under the Christmas tree for a few people!

As you might expect, the food in Woodford Brave is kid-friendly. Peanut butter sandwiches, ham and biscuits, jam. There’s mention of cakes, canning tomatoes and Victory Gardens. I like making mini-muffins, layering the muffin with a bit of fig jam and country ham for a delicious alternative to a plain ham and biscuit.

I have to punt on the child actors. But for the adults: